This Mug Keeps Your Coffee a Constant Temperature for Hours

It was 2009 when Clay Alexander, a thermal scientist who had recently sold a light bulb design to GE, was in his kitchen staring at his plate of recently cooked scrambled eggs, which had already gone cold. He thought to himself: “The plate hasn’t changed since the caveman days, when it was a flat stone.” Alexander engineers temperature controls for a living—surely, he thought, he could come up with a better plate than this primitive one. 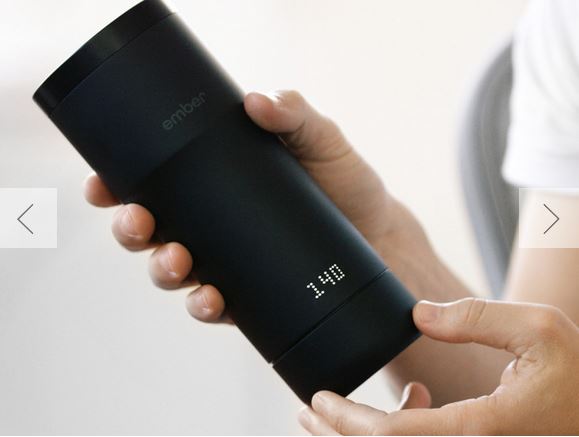 Thoughts just like these have launched a thousand smart gadgets. Some are true game-changers (like the Nest Thermostat), others are just parodies of Silicon Valley’s get-rich-quick culture run amok. (Does the world really need Wi-Fi-enabled diapers?) As for Alexander, his musings led him to start Ember, a new company that plans on using thermal science to make our kitchen devices smarter and our food better.
Ember’s first product is a travel mug designed to cool your coffee to the temperature of your choosing—anywhere from 120 to 145 degrees—six times faster than it would normally, and then keep it there for about four hours. It’s chock-full of high-tech material that makes that possible, though you’d never know it by looking at the mug: Ammunition Group (who designed the Beats by Dre headphones) created a black, bullet-smooth vessel for Ember, with no buttons or dials in sight. The only interface is the bottom of the mug, which is a wheel you turn to adjust the temperature inside, and a small capacitive screen disguised on the mug’s exterior.
Inside the walls of the mug, Alexander has hidden a passive cooling system and an active heating system. The cooling component is a phase-changing material that Alexander says is texturally similar to candle wax. It occupies the upper two-thirds of the vessel. When hot liquid gets poured into the mug, this material absorbs the heat and stores it, causing it melt. At the same time, a microprocessor and sensors in the mug monitor the coffee. When it hits the user’s specified temperature, the heating system, which lines the bottom third of the mug, kicks in.
The mug’s battery lasts about two hours. A capacitive charging coaster can keep the mug charged indefinitely, but if the battery dies, the passive cooling component picks up the slack. It does this by returning the energy it absorbed earlier back to the coffee in the form of heat, keeping the coffee warm for an additional two hours. All this activity can be programmed through a simple app, also designed by the Ammunition team, which shows the chosen temperature, a graphic of a thermometer, and little else.
Packing all this tech into an on-the-go device could have made the mug heavier than any mug should be (“Do I want to carry around a brick throughout my day?” Alexander says. “No.”), which is why Ember’s team includes five cell phone engineers that Alexander poached from Microsoft. “You can’t believe how much they’ve shrunk the weight of the electronics,” Alexander says. “You know when you go to Starbucks and they have the ceramic mugs for sale? Ours weigh the same.”
The mug, which will ship in April 2016 and costs $129, is just the inaugural Ember product; Alexander says they have “full blown working prototypes” of everything else they plan to launch over the next five years. A coffee mug is great proving ground for thermally intelligent dishware, but Alexander’s mission with Ember is more kitchen-centric. He says he thinks a lot about events like Thanksgiving, where you work hard to prepare a big meal, only to have it go cold while everything else falls into place. As with the mug, he wants to create devices that can solve that problem while showing no trace of the technology that makes it possible.
That’s the “why are we doing this,” Alexander says. After all, he adds, this is the 21st century.