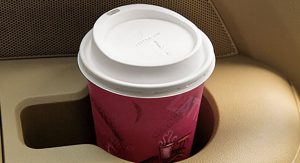 When you think about distracted driving, you think about drivers who text or talk on their cell phones while driving, right? That’s not to discount the occasional mid-traffic recorder jam sesh or Rob Ford-esque impromptu book club. But one cop in St. Paul, Minnesota thinks she knows better.

What is the injustice that this officer deems worthy of combatting while in uniform? The inky grasp of the temptress known as coffee, that’s what.

Imagine this: you are an animal-rights worker setting out to do good. You pull your car onto I-94 in the St. Paul, Minnesota area and suddenly, flashing lights appear in your rearview mirror. A cop pulls you over … and you find out it’s for the criminal act of drinking coffee while driving.

That’s exactly what happened to Lindsey Krieger this week. On Monday morning, a cop told her she was being cited for taking a sip of coffee whilst driving on the highway.

“I was completely dumbfounded,” Krieger said.  “I thought it was a joke!”

Krieger had no idea. After asking a few more times, the police officer said this was the cause of the traffic stop: “Drinking coffee. It’s against the law to drink coffee while you’re driving.”

Sgt. Mike Ernster of the St. Paul Police Department explained the traffic stop likely fell into the category known as “distracted driving.” He explained to Fox9 News that, “Inattentive driving relates to anything that takes your attention away from those obligations of every driver, which is to pay attention.”

That’s right: anything that distracts the driver. Sure, texting and making cell phone calls are the most typical distractions for drivers. But generalized distracted driving laws can go beyond the usual.

And, perhaps, rightly so. A recent study by the National Highway Traffic Safety Administration (NHTSA) concluded that those who eat and drive increase their chance of ending up in an accident by 80 percent. That’s a big number. In addition to that, 65 percent of near-miss accidents involve food and drink.

The biggest problem, according to the NHTSA study? Coffee. Coffee is danger number one when it comes to food or drink in cars—after all, it is typically served piping hot and encased in a flimsy plastic cup with a confounding plastic lid.

Still, no one expects to be ticketed for drinking coffee in a car. As Jon Cummings from Minnesotans for Safe Driving sagely put it: “Every car you drive in has cup holders in it.” Good point, Mr. Cummings. “You don’t have to go three blocks before you see somebody doing something really dangerous. Those are the people we should be focusing on,” Cummings added.

As it turned out, Krieger was given a ticket, but not for sipping coffee. Krieger says the police officer told her, “I’m going to give you a warning for the coffee but I’m going to give you a no-seatbelt ticket.” This news wasn’t much better in Krieger’s opinion, especially given that she says she just happened to take off her seatbelt after she was pulled over.

Krieger told local news that she plans to contest the ticket and that—screw it—she’s going to keep drinking coffee in her car.