It’s true! Chocolate and coffee are good for you 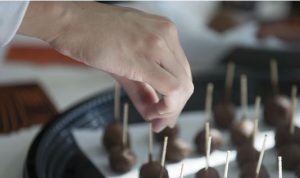 I have good news regarding what we eat and our health. New studies in the mainstream medical literature give more proof to the health benefits of what Americans just love to consume.

Chocolate not only tastes good, it’s good for you.

How often does that happen?

Yep, it’s good for your heart and brains. Like many of you, I can’t live a day without a fix of at least a little chocolate.

Investigators reported the results of a large study on the health effects of chocolate in the prestigious British Medical Journal. The study revealed a 37 percent reduction in cardiovascular disease and a 29 percent lower risk of stroke among those who eat the most chocolate as compared to those who eat the least chocolate. The analysis of the data controlled for age, sex, body mass index, physical activity, smoking, diet and educational level among the more than 114,000 participants. These results are consistent with past smaller studies that showed an inverse relationship between chocolate consumption and coronary artery disease, other cardiovascular diseases and metabolic disorders.

The researchers analyzed the results of seven studies spanning up to 16 years that looked at any type of chocolate intake, including dark, milk or white, as well as in any form, including drinks, desserts, candy, bars or even nutritional supplements (Although this study included all types of chocolate, most authorities believe dark chocolate with 60 to 70 percent cacao is the most beneficial). Intake ranged from never to more than once per day.

The effects are thought to be a result of chocolate’s high content of polyphenols that increase the action of nitric oxide. Nitric oxide has benefits in artery endothelial function, reduction in platelet adhesion, and other favorable effects on blood pressure, insulin sensitivity, blood fats and cholesterol.

There was also a reduction in new-onset diabetes in men, but not in women, among frequent chocolate eaters. One caution: Eating too much chocolate may obviously have untoward effects if it results in weight gain.

More good news for coffee drinkers: In a study published in the journal Diabetes, investigators at the University of California, Los Angeles followed 718 diabetic and non-diabetic postmenopausal women over 10 years. They found that women who consumed four or more cups of caffeinated coffee per day had a reduced risk of developing type 2 diabetes by 53 percent as compared to those who do not drink coffee. The researchers correlated the effect to increased levels of sex hormone-binding globulin. It is thought in some way that SHBG may affect glucose metabolism or reduce insulin resistance. A 2009 study in the New England Journal of Medicine also showed that higher levels of SHBG were associated with lower risk of developing diabetes.

In the new study, only caffeinated coffee was effective. But in an earlier study in the journal Archives of Internal Medicine, decaffeinated coffee actually out-performed caffeinated coffee. So the role of caffeine seems unclear. Also, these studies were conducted on women. It is unknown if the effect extends to men, but my guess is that it does.

Daily coffee and chocolate in reasonable moderation appear to be good things. Don’t we wish that so many other fares we love to consume would treat us so well?

So, Happy Holidays everyone! And while you’re celebrating, why not indulge in a little chocolate and a cup of coffee?

Feldman is director of medical education and family medicine residency at Franciscan St. Francis Health. He is a former Indiana state health commissioner.

Our warm compliments & thanks to the author & publisher (Richard Feldman).