Coffee or Tea? A Nutritionist Weighs in on Which Is Healthier 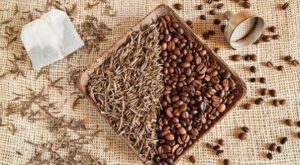 A colleague recently came to me asking what’s better: coffee or tea? She told me that she (a coffee drinker) and her boyfriend (more of a tea guy) were debating which beverage is healthier, each believing their own personal preference was the more virtuous option.

It’s a good question because it seems like every day there’s news about the health benefits of one or the other, but you never see the two compared.

The truth: there isn’t a clear standout. Both of these uniquely healthy pick-me-ups have their own long list of health pros—and cons. Below, I go over the reasons to sip one or the other, along with tips for getting the most out of each one.

The pros: Tea boasts a long list of health benefits. The rich antioxidants in tea fight inflammation, and have been shown to help prevent blood vessels from hardening. Tea drinkers have a significantly lower risk of stroke and heart disease, and tea is known to boost brain health. One study, for example, found that compared with older adults who drank less than three cups a week, those who drank more than two cups of green tea a day had a significantly lower risk of age-related declines in memory.

The cons: The first one is purely cosmetic—stained teeth.

Another is the potential impact on your iron levels due to tanins, a type of antioxidant that interferes with the absorption of non-heme, or plant-based iron from foods like greens and beans. In one classic 1982 study drinking tea with a meal resulted in a 62% reduction in iron absorption compared to 35% for coffee.

Finally, if you’re sensitive to it, the caffeine in tea may also be a con, although the levels are lower than coffee. One cup or eight ounces of black tea contains 14-70 mg of caffeine, and green tea 24-45 mg, compared to 95-200 mg in the same sized portion of coffee.

The most important tip for tea is to limit or avoid adding sweetener. Enjoy it hot or iced, and if you need a little sweetness add a splash of 100% fruit juice. You can also add flavor with a bit of natural seasoning, like fresh grated ginger, or fresh mint. Each of these also boosts the antioxidant potency in your mug.

As for the iron issue, if you’re an omnivore this is less of a concern since tannins do not impact the uptake of animal-based heme iron found in meat, fish, and poultry. But if you are vegetarian or vegan the best way to offset the impact is to consume your iron-rich plant foods with a source of vitamin C. In the same study, OJ upped iron absorption by 85%. Other top vitamin C sources include bell peppers, broccoli, cauliflower, Brussels sprouts, kiwi, and strawberries.

Pros: The good news about coffee just keeps on coming. A brand new Harvard study found that those who drink about three to five cups of coffee a day may be less likely to die prematurely from some diseases than those who drink less or no coffee. A rich source of antioxidants, regular coffee consumption has also been linked to protection against type 2 diabetes, Parkinson’s, and certain cancers.

Cons: Natural substances in unfiltered coffee (meaning boiled or espresso) have been shown to raise cholesterol levels slightly. Also coffee is more acidic than tea, so if you have stomach or digestive issues you may tolerate tea better.

Coffee has long had a reputation for bone issues, but it remains unclear how significant the effects are. One study found that a high intake of coffee—four or more cups a day—reduced bone density by 2-4%, but the effect didn’t translate to an increased risk of fracture. However, if you already have low bone density coffee consumption is something you should discuss with your physician.

The remaining cons of coffee are primarily tied to its caffeine content, which again is higher than in tea. Caffeine is a stimulant, so if you’re sensitive to it coffee may leave you feeling overly stimulated, jittery, and anxious. If you have high blood pressure, you should limit your caffeine intake because caffeine can cause a short, but dramatic spike in blood pressure.

Our warm compliments & thanks to the author & publisher (Yahoo Health).