Why You Shouldn’t Drink Coffee When You’re Drunk 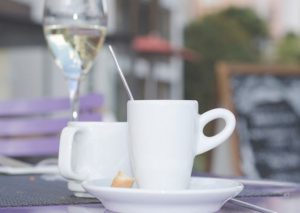 If you’ve had a couple of drinks with dinner, you might be inclined to order a cup of coffee with dessert. Your hopes: to sober up and to perk up.But that’s not a smart choice, says Robert Swift, M.D., Ph.D., the associate director of Brown University’s Center for Alcohol & Addiction Studies. Caffeine can trick your brain into thinking that you’re less drunk than you actually are, he says.

Here’s why: As soon as you start drinking, alcohol signals your brain to pump out higher levels of the feel-good neurotransmitter dopamine. In turn, dopamine activates the production of a chemical called cyclic AMP.

Cyclic AMP makes your brain more active. You feel happier, and you’re more talkative and energized. To make sure your brain doesn’t go into overdrive during this time, your body keeps the chemical in check using special enzymes. (That’s just one of the effects of Your Body on Booze.)

But once you stop, alcohol’s sedative properties start to kick in. The alcohol sparks the release of other neurotransmitters that start to slow down all of your brain’s processes. You begin feeling tired and fuzzy, and your reaction time gets sluggish, says Dr. Swift.

But when you add an 8-ounce cup of coffee to the mix, the caffeine blocks the special enzymes that control the energizing cyclic AMP. This ramps up alcohol’s feel-good effects while turning down its sedating effects.

So even though alcohol continues to make your brain more sluggish, you start to feel more energized and not as drunk. You may be more likely to go for another round or attempt to drive home.

And that’s problem because caffeine masks alcohol’s sedation, but it doesn’t actually reduce the amount of alcohol in your blood, says Dr. Swift. You’re still drunk.

What’s more, this alcohol-coffee mix screws with your body in bed. A few hours after you stop drinking it, alcohol causes an energizing rebound in your brain, which can cause you to wake up in the middle of the night.

And since caffeine sticks around longer in the body (about six hours), its stimulating effects will make it harder to fall back asleep. Come morning, you wake up exhausted—and more hungover than usual, since caffeine, like alcohol, is dehydrating.

Your best bet, then, is to separate your booze from your brew. But if you must end your meal with some coffee, make it decaf.

Our warm compliments & thanks to the author & publisher (Marygrace Taylor – Men’s Health – Oct 2015).