Why coffee naps are better than coffee or naps alone 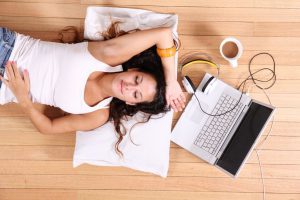 Fading fast and need a jolt of energy? Sure, a cup of coffee can be great for that, and studies have shown that midday naps at work are awesome for your health, but what’s even better than coffees or naps? Drinking a coffee and then taking a nap. It sounds really counterintuitive, because we all know caffeine messes with your ability to sleep (that’s the whole point), but the trick here is that the caffeine in coffee doesn’t kick in straight away.

If you can strategically time your coffee and your nap, you can be unconscious for those rough few minutes that the body spends digesting the coffee, says the video from Vox above. And how long is that? It takes about 20 minutes for the coffee to reach your small intestine, pass into your bloodstream, and then make it to your brain. So if you can time your nap to be just 20 minutes from the moment you’ve had your coffee, you should wake up feeling pretty great.

How does this work? The reason you were feeling crappy in the first place is a molecule called adenosine in your brain that’s responsible for making you feel tired. We produce different amounts of adenosine throughout the day – it’s a by-product of brain activity, so at the end of the workday you’re likely to experience a build-up of adenosine, which slows down your neurons and makes you feel tired.

It all makes sense, theoretically, but what does the experimental evidence say? The video says there aren’t a great deal of studies looking into the effects of coffee naps, but of the handful available, one describes how people who took a 15-minute coffee nap made fewer mistakes in a driving simulator than if they only drank coffee, or only took a nap. The coffee nap group was also more consistently alert throughout the simulation than the others. Another study found that people who took coffee naps performed better in a series of memory tests.

So how exactly do you time a coffee nap? You have to time the coffee part so you’re not trying to sleep when the caffeine is kicking in, and you certainly don’t want to accidentally enter into the deeper stages of sleep. Watch the Vox video above to find out the best coffee nap technique, and they even have some great news for those who struggle to fall asleep straight away. You’re welcome.